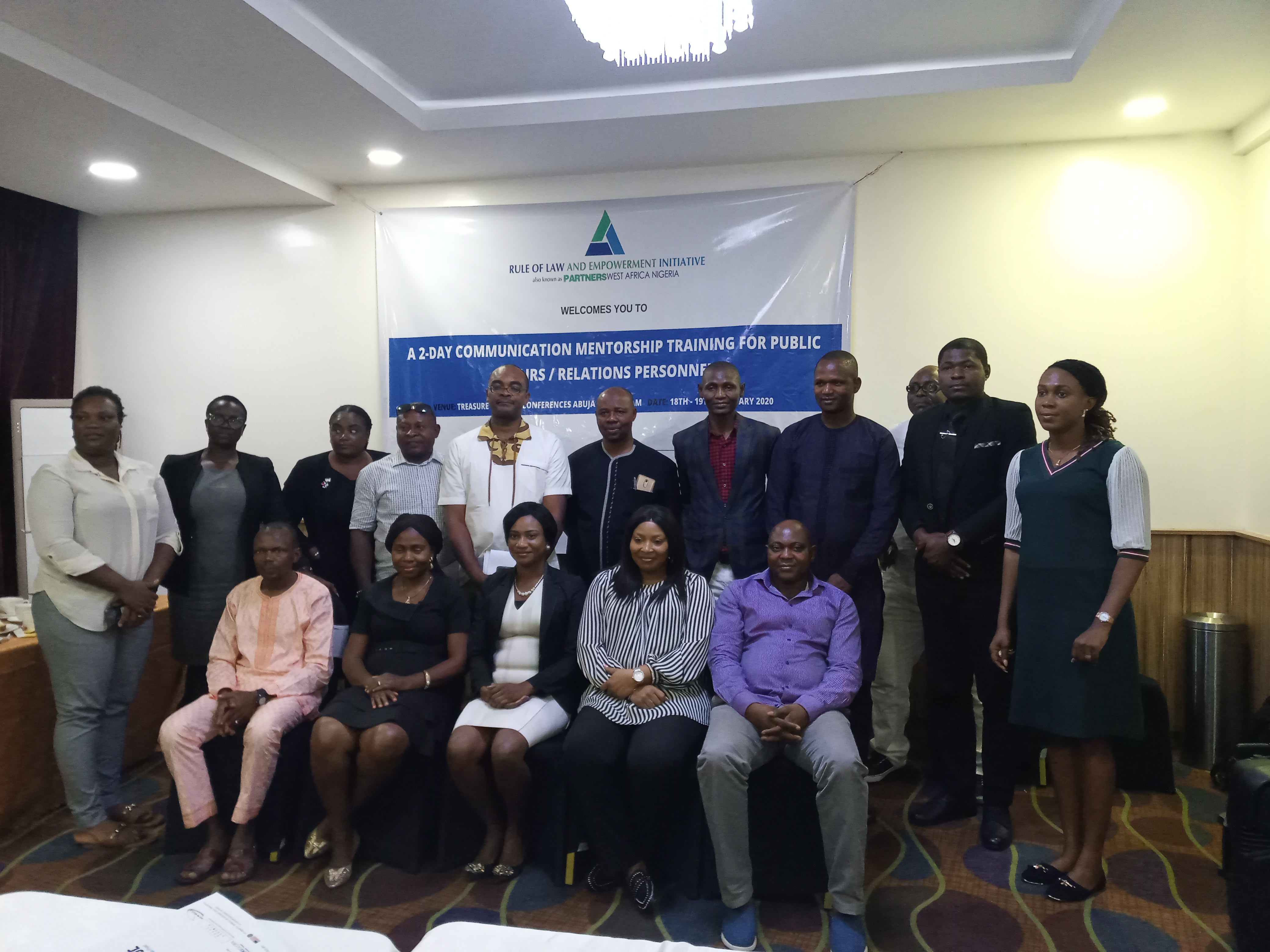 Storytelling and effective communication are like bone and blood that cannot do without the other. The same goes to organizational communication and report writing where information is targeted at a certain audience. This was made know by Mr Crispin Oduobuk, Managing Director, BW Binary Ltd, Abuja at the 2-Day Communication Mentorship Training for Public Relations/ Affairs Personnel held at Treasure Suites and Conferences, Federal Capital Territory (FCT) Abuja on 18 and 19 February 2020.


Welcoming the participants to the event, Mr Crispin Oduobuk, an experienced media and communications consultant said, many civil society organizations have started advancing their report writing because of a paradigm shift in storytelling. He maintained that project writers should be creative to enable them to compete with their global counterpart when it comes to seeking funds from donor agencies for their projects.


"I don't think there is any organization that can survive without effective communication. It is so important that it enables whoever passing the information to get along with the audience so that the right message will be delivered. Communication is equally crucial because it engenders and motivates interest in people, it enables organizations to relate well with policymakers to know how to deal with them"


According to him, every organization must be able to create a compelling story about itself in such a way that their efforts will be well known to the people. The same goes to report writing which calls for serious creativity in convincing and conveying the right information to the target audience.


On Proposal Development, Mr Crispin noted that many donor agencies are gradually becoming tougher in their demand for proposals from organizations because of emerging cases in proposal writing. He added that a good proposal must have a catchy headline, good abstract, realistic statement of needs which should be able to answer important questions, a viable methodology, qualified and seasoned Monitoring and Evaluation Officer who will devise a yardstick to measure the goal attainment and provision for public relations who will broadcast what the organization is doing.


"I expected every organization especially the civil society to make provision for communications office at the developmental stage of every proposal because if they failed to do so and later included it, some donor agencies might refuse to acknowledge it which could aggravate the success of the request".


In his presentation, "Communication Strategy, Media Relations and Monitoring", Mallam Umar Faruk Salifu, a seasoned journalist and broadcaster from the Liberty TV Abuja said, news writings and storytelling are Siamese on the umbilical cord of narration which must be well-tailored to suit not just the audience within but outside the immediate environment, adding that the most important part of journalism is "facts and secrets" in getting information and passing it across to the audience.


He further stated that a media relation is about devising a workable synergy with the media towards achieving the set target within the confinement of regulated timeline. Mallam Umar Faruk noted that every organization must know the editorial policy direction of the Nigerian media which would minimize wasted effort in getting their stories published apart from their website.


"If I were you, I will make sure that I engage the media soldiers, collaborate with the like minds, engage in professional clipping, and compare results and activities to evaluate how well your organization is doing in reaching the audience".


"Professionally, you must be able to handle press interviews on radio, television or on live streaming in such a way that you don't fumble. Some people don't know that when it comes to this, they need to be well informed about the topic of discussion, rehearse and practice public speaking regularly, avoid guessing answers to unknown questions if you have no right answers, maintain eye contact with the interviewers, avoid unnecessary argument on air"


Other aspect of the programme sees facilitators taking the participants through social media and digital marketing as a tool of public relations, working with brand ambassadors or influencers for project accomplishment, how to produce a good documentary with a viable storytelling and scripting, important photography techniques, how to set up a blog calendar and managing it as well as how to manage consultants and freelancers for projects. 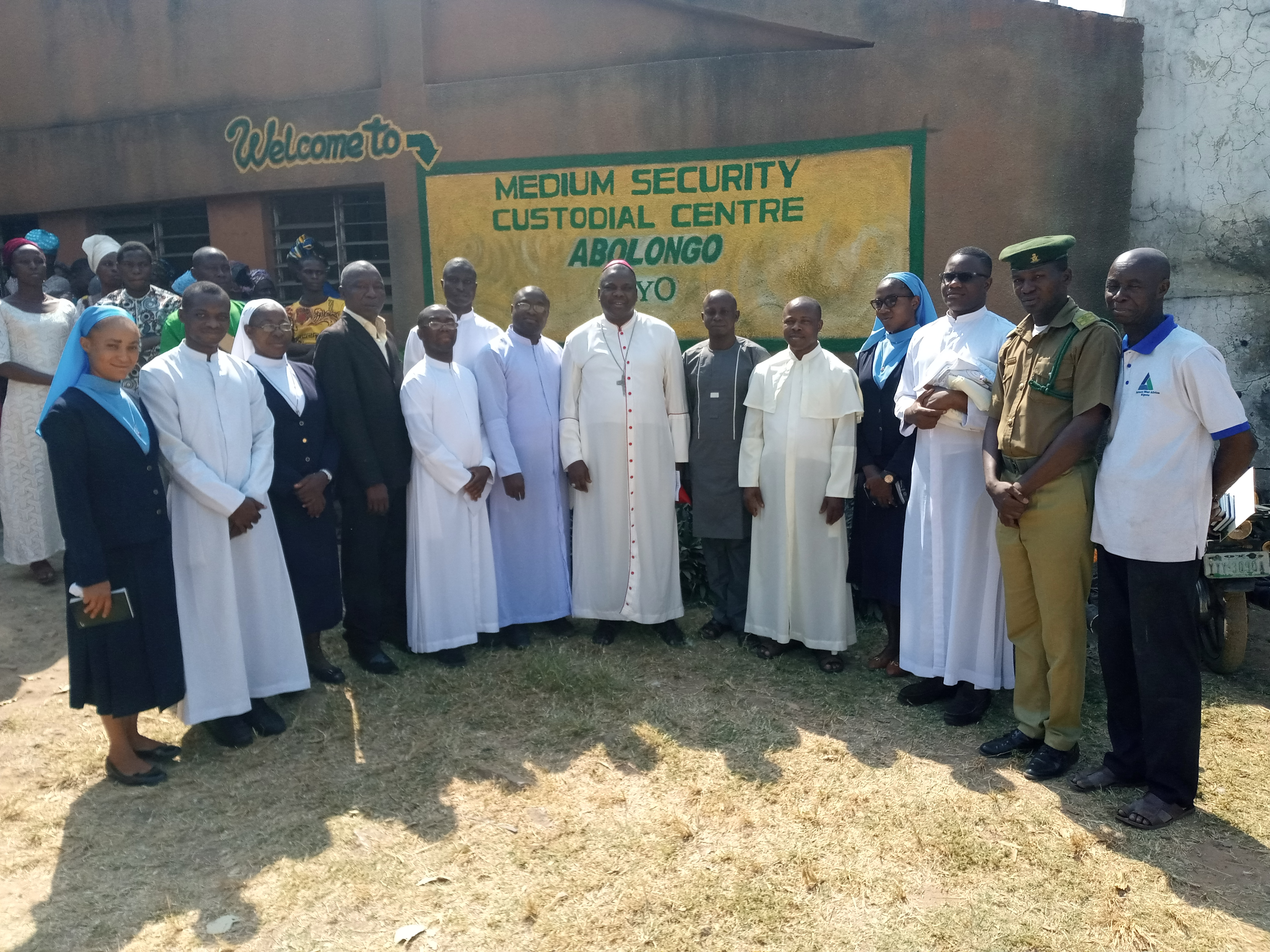 Christmas celebration has been described as a time of sober reflection to assess the importance of Christ birth. It is a time to appreciate God for his mercy over the human race whom He has compassion for by sending his only begotten son to carry away the sins of the world. This was made known by the Most Rev Adetoyese Badejo, the Bishop of Catholic Diocese of Oyo in a Christmas message at the Abolongo Medium Correctional and Custodian Centre Oyo on Thursday, December 26th 2019.

Addressing the inmates during the service, Bishop Badejo said Christmas period is not about feasting and merry alone, instead, it is equally a time to appreciate God for sending the Messiah to liberate the world from all sort of sins and oppression. It is time to show more love for one another and make peace with everybody.

According to him, it is the tradition of Catholic Church every year to celebrate with inmates to bring a message of salvation, hope and love through the body of Christ in such a way that more lives are saved and brought back into God's vineyard. He preached from Luke 2: 8-13 and Acts 15: 23 where it was revealed that the world is in one common prison which is the bondage of sins. He alluded the power of God to do many impossible things where a man can fail.

Bishop Emmanuel Adetoyese Badejo maintained that Paul and Silas have been brutalized publicly for preaching the good news of salvation to the people which led them into the prison so that they would be tried by the judge with treason only for God to send his angel to free them despite the human security parameters.
"You may think your problem is insurmountable and you may think you are alone here. No! don't give up just like Paul and Silas who kept praying and worshipping God in their trying time. God is able and he can deliver and set you free from here if you watch your step and obey his laws"

"I am appealing to all of you to know that Jesus loves you. Open the gate of your heart and allow him to come in because he has been knocking. Maybe some of you are here because of a mistake in your conducts or fall into the trap of sins, I don't want to know because all that matters now is being saved so that you wouldn't go back into crime after leaving this place."

In his remark, the Coordinator, Justice Development and Peace Movement (JDPM) Oyo, Rev Father Gabriel Adeleke said Christmas is a season of love, peace, joy and hope. He added that challenges are part of life but those four tenets kept the lives of all believers intact. Rev Father Gabriel appealed to the inmates to remain steadfast and appreciates God for keeping them alive because when there is life, there is hope.
"Who knows the majority of you might be unlucky to be in this prison for one thing or the other but don't forget that Christ still loves you. He was born to set the captive free, bring a message of peace, love and hope. He can still set you free if you have faith and watch your life".

He appreciated the support of Bishop Badejo for the prison programme every year and more importantly for creating a time out of his busy schedule to attend the programme this year. Father Gabriel lauds the effort of the Prison Apostolate Committee who worked tirelessly in liaising with the prison management to make the event a success.

In his vote of thanks, the Welfare Officer, Abolongo Medium Correctional and Custodian Centre, Ori-Awo, Oyo, Mr Ayinde appreciated the effort of the Catholic Diocese of Oyo for the humanitarian supports they have been giving the correctional Centre either during Christmas period, routine free medical treatment of health challenges of inmate or picking up of freed inmate whenever the Oyo State grant amnesty over the years. He, however, appealed for the availability of more drugs, soaps and other toiletries including disinfectants in the prison and completion of the Chapel where many inmates could worship.

The highpoint of the service by the presentation of special Christmas songs by the Lord Bishop, Most Rev Adetoyese Badejo through acoustic guitar and melodious solo tone where the ecstasy of the celebration received more happiness. Also, there was a presentation of a song by the Franciscan and University Sisters as well the inmates, distribution of religious materials: rosaries, tract and pamphlets, bibles, hymn books amongst other relief materials and well-nourished packed foods were distributed to the inmates. 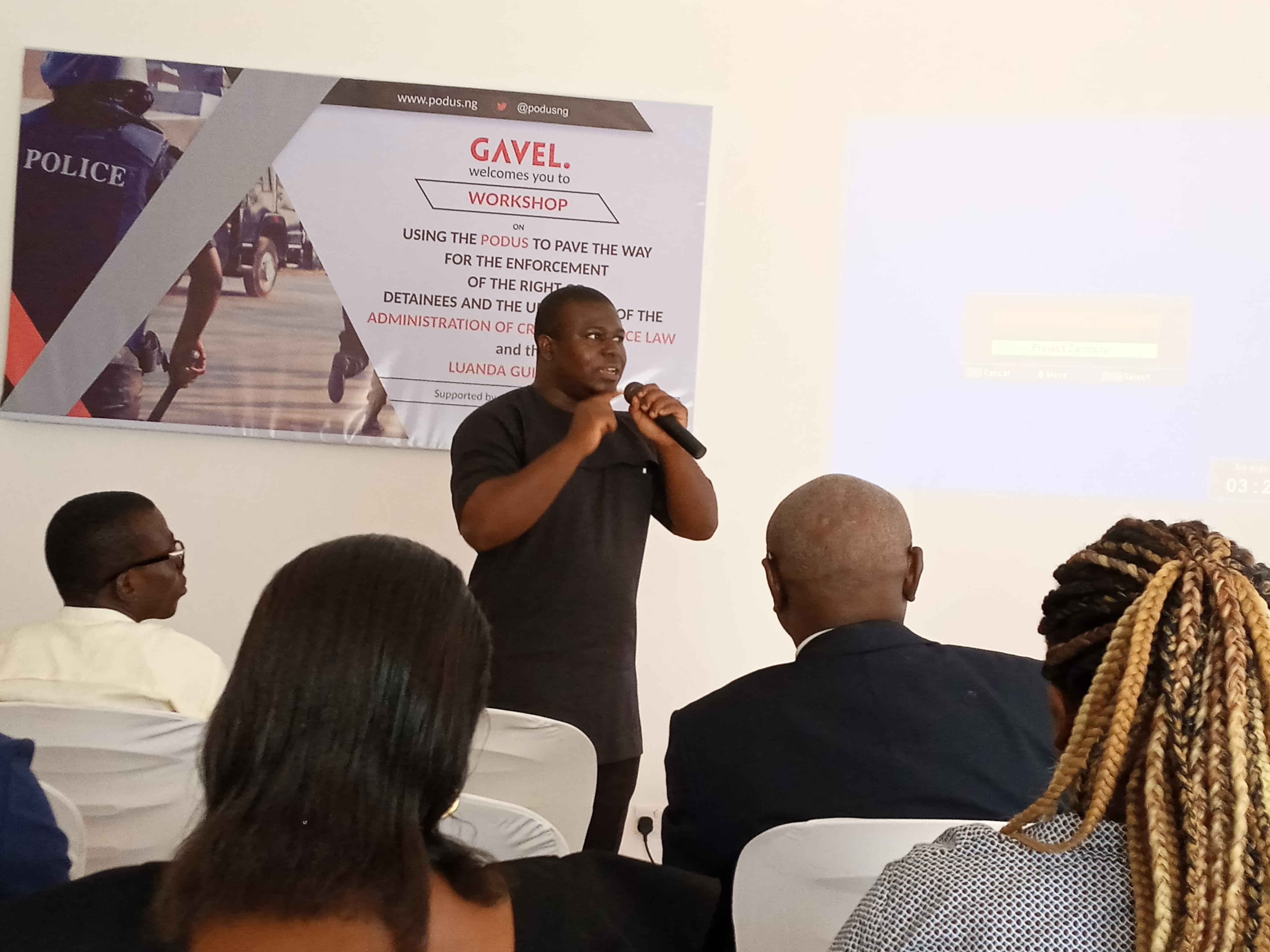 Corruption is a cankerworm that eats up any nation, while injustice flourishes in a lawless state where the rich crush the poor unchecked, then justice must reign to subdue all these forces if peace must reign. On this premise, the Politics and Human Rights Department of Justice, Development and Peace Movement Oyo attended a day Workshop on "Using the Podus to pave way for the Enforcement of the Right of Detainees and the Upliftment of the Administration of Criminal Justice Law and the Luanda Guidelines" held at Justice Lab, Soun Ajagungbade Avenue, New Bodija Ibadan on the 9th of August, 2019. The event featured participants from Ibadan, Oyo and Lagos with Lawyers dominated the most, followed by human rights activist, journalists and volunteers.

In his welcome address, the Founder, Project and Team Lead, Citizens Gavel, Barrister Nelson Olanipekun gave a brief introduction and analysis of the Police Duty Solicitors Scheme pursuant to the Force Order 20. He said that the provision is positioned to address frequent claims and jurisdiction on prosecution of culprits by the Police and other security agencies.

Speaking further, Barrister Femi Ajibade said, emergence of Gavel is a hope to the vulnerable and active poor who could not afford to hire lawyers on human rights abuse in the society, adding that the launching of PODUS App which can be downloaded from www.podus.ng would fasten treatment of human rights abuse by most security agencies in the society as it afford users opportunity to provide a quick complaint which will link them to an appropriate team of legal experts on the platform.

Unveiling the PODUS App, the ICT officer, Mr Dare Ayankoya, while demonstrating the app, asserts that the app provides a quick and easy accessibility through various interface and menu which makes it to get a prompt feedback on cases. He navigated the session through the www.gavel.ng website and the link to www.podus.ng where users are required to sign up either as a user or lawyer providing pro bono services.
The feedback and reviews session on PODUS App was interactive as participants deliberate on the viability of the initiative using tech to address series of social issues that have eroded our society for years. Barrister Nelson Olanipekun took the participants through the enforcement of the provisions of ACJL and the Luanda guidelines in relation to arrests and detention of suspects or an accused person.

He maintained that Gavel is a civic tech organization aimed at improving the pace of justice delivery through technology in Nigeria. He bemoaned the usual habit of many security agencies especially the Police and Special Anti Robbery Squad (SARS) who often brutalize Nigeria's citizens on inconsequential issues, adding that the Open Society Justice Initiative through the civic tech hub like Gavel, Civic hives and co are poised to put an end to the dastardly act of these security forces through series of outline mechanism.