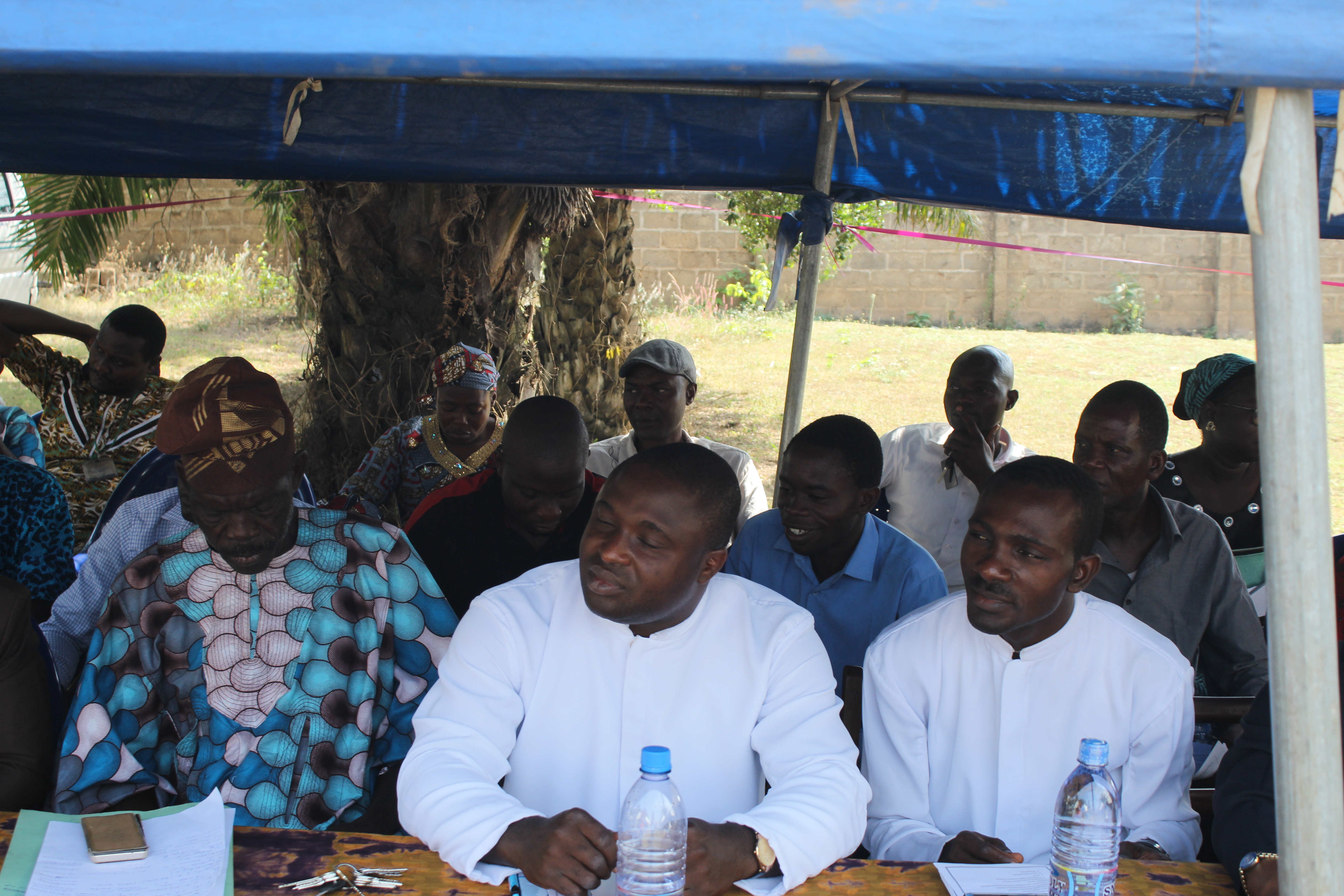 It was another remarkable moment for the Rural Development Programme (RUDEP) Department of the Justice Development and Peace Movement (JDPM) of the Catholic Diocese of Oyo as it celebrated the 2019 Annual Farmers' Forum in grand style with the topic 'Shortage of Labour on the Farms; Farmers-Herdsmen Crisis, the way out? on 12th December 2019. This is not just an event because it is a gathering of farmers from different part of Oyo, Oke-Ogun and Ogbomoso where important issues are discussed and analyzed by stakeholders in the agricultural sector.

In his welcome address, the outgoing Chairman, Sustainable Farmers Association of Nigeria (SUFAN) in Oyo State, Elder Alani Oguntona, appreciated God for the lives of members who witnessed the previous and present edition of the programme. He said RUDEP started since a decade ago under the auspices of Oyo, Osun Agricultural Diocesan Programme (OODAP) before the separation of Osogbo and Oyo Diocese in 1995 when it changed its name to RUDEP.

"Since the inception of this noble platform, RUDEP have been growing in strength and membership spreading beyond Oyo to Ibadan, Osun, Ekiti and Kwara state. The maiden edition of Annual Farmers Forum was held in 21st November 1998 where we rob minds on important issues on agriculture just like today"

He opined that if the group will surpass expectations in success, members should remain united, patient, creative, support one another and eschew all forms of religious and ethnic bigotry. Elder Alani Oguntona added that government at all level must support agricultural development and embraced youth and women involvement in Agribusiness. He appreciated the longtime relationship and supports of partners of RUDEP such as; IITA, HARVESTPLUS, NIHORT, IFAD, AGROTROPIC, CRS, FADAMA, OYSADEP, IAR&T, NASC, ADP amongst others.

In his opening remark, the Coordinator of JDPM Oyo, Rev Father Gabriel Opeyemi Adeleke charged the farmers to be united in decision making and action plans, adding that formidable networking must exist between farmers from different zones to work against the ugly trend of farm invasion by the herdsmen in their respective zones.

"Often time, we blame the government for most of our national problems whereas those in the corridor of power cannot do it alone. We failed to realize that we all have roles to play in maintaining peace and order in our society. The issue of Farmers-Herdsmen is a serious problem for years but it is as if it has taken a different dimension in recent time because of disunity among the farmers themselves. If you are fighting a war, you cannot win without teamwork"
Rev Fr Gabriel Adeleke charged farmers to be proactive especially on the sustainability of agribusiness initiative, adding that farmers must be well prepared against any unforeseen contingencies because it is the current situation globally where everyone is on the alert for any unplanned development.

"I just want to appeal to us to be prepared because if probably RUDEP stop partnering with you in the future, how are you going to survive and leverage on what you have learned over the years in such a way that you will continue to function effectively like before."

According to him, farmers should embrace integrated modern farming where they will use technology to do many things on farms. He said agriculture in some advanced economy has surpassed crude subsistence farming because a lot of population need to be fed while the revenue base of farmers could also improve especially through commodity cluster system and financial inclusion on food value chain for effective profitability ratio.

Delivering his keynote speech, Dr Hamzat from IAR&T, Ibadan, noted that the major issue that affects the availability of Labour hands-on farms is that there are no basic amenities in the rural areas. He further stated that massive rural-urban migration could have reduced if there are good roads linking farms to towns, stable electricity which could make life better including portable water instead of walking some kilometre to fetch water.

"Our people are suffering in the rural area because they lack basic social amenities such as good roads, good schools, portable water, electricity, and maternity centres where they can easily get proper medical attention on health challenges. Everybody loves pleasure. Our youths are running away from farming because there is no encouragement at all. They prefer education to farm because all of them want to work in Offices. Those who managed to do agribusiness for a while prefer daily revenue to season investment, that's why you see majority of them riding "Okada". Does that have a future?"

He admonished the government representatives at the venue to ensure that they provide basic amenities for rural communities and make farming more attractive to the youth and women to reduce the rate of rural-urban migration.

Another speaker, Dr Popoola also from IAR&T said the issue of finding a market for farm produce is the major concern because if there is a ready-made market for such commodities, farmers wouldn't continue to lament yearly.

Dr Popoola maintained that farmers must pay attention to the way they treat labourers on the farm because they deserve a good treatment just like every other human being. He cautioned them to be fair and open-minded with their labourers by allowing them speak their minds out whenever needs are because nobody is an island of knowledge.

"I want to appeal to all farmers to be paternalistic towards your workers. You may be the boss but do not forget that these people have a family like you and I. So if you want good things on your farms, you must improve your human relations. You must desist from seeing labourers as a mere poor people. I know a particular farmer who owns a big farm somewhere in Oyo State; he treated his Labourers with integrity to the extent of establishing a thrift and credit group for them so that they can have good savings to buy things yearly. All these can determine the number of Labour hands-on farm every season because if you don't treat your workers well, they will not only devour you, you will still have the problem of starting afresh in search for a new set of labourers which could affect your productivity"

Delivering the second keynote speech, the Director of Agriculture, Federal Ministry of Agriculture and Rural Development (FMARD), Ibadan, Mr Popoola noted that the issue of Farmers-Herdsmen crisis is a serious challenge the country has been battling for years but the present administration of President Muhammadu Buhari is committed to finding a workable plan to put an end to the situation.

According to him, the federal government is aware of what farmers are facing and all stakeholders meetings have been working and networking with the concerned authorities to stop the problem. He said some state have passed anti-grazing law with strict sanction for trespasses in some states such as Ekiti, Delta, Anambra including Oyo State.

"As part of ways to put an end to this challenge, there is federal legislation which prohibits Herdsmen from invading farms at any time of the day. He added, no Fulani ward can take cattle around until he clocks age 18. He equally emphasized that whoever wishes to wander around with his cattle can only do so between 6 am and 6 pm since there are some cases of nocturnal farm's invasion lately."

"Apart from the anti-grazing law, another solution to solve the challenge is effective government policy, group dynamics and cooperation between the law enforcement agency and farmers, unity of action and direction by farmers as well as frequent dialogue between the community, traditional and religious leaders to preach a message of peace."

While lauding the antecedent of agribusiness in Nigeria, the experienced speaker referenced the ingenuity of the African Geographical Society (AGS), a group of visionary business-oriented individuals in the United Kingdom (UK) who sponsored notable people such as Mungo Park amongst others on a special mission to identify opportunities globally led them to Nigeria agricultural market because they realized how important it is to have a good access to raw materials from the hinterland to get across the harbour to their fleet en route England and other parts of Europe.

The goodwill message from Bishop Adetoyese Badejo of the Catholic Diocese of Oyo and Legal Holder of JDPM ably represented by Rev Father Benjamin Jolasun charged all farmers to remain united, steadfast and hardworking to augment food security in the State. He appealed to the youth to embrace farming with passion and positive mindset instead of joining the bandwagon of "Okada riders" because a vast majority of youth prefers quick daily money to invest themselves in agribusiness which could assist them to earn a living for a long time.
While giving his vote of thank, the Programme Manager of RUDEP, Mr Anthony Ogunnupebi appreciated God and the presence of all the invited guests, farmers, partnering institutions and the entire JDPM staff for their contributions and patience towards the success of the programme. He, however, solicit for their continuous supports and cooperation in the subsequent edition of the programme.

The high point of the event was inauguration of new SUFAN executives; Okedele Matthew as Chairman, Ojoawo Pius- Vice Chairman, Abidoye Kazeem-Secretary, Fajinmi Joseph- Assistant Secretary, Imran Beride-Financial Secretary, Joshua Ojedele- Treasurer, RUDEP-PRO 1, Jide Folawiyo-PRO 2, Adebayo Oluwole- Patron, Alani Oguntona- Ex-Offio and Oyeleye Romoke-Welfare Officer. Presentation of farmers zonal reports by their representatives, presentations and exhibition of products by the invited institutions, presentation of Certificates to the Catholic Agricultural Development Initiative (CADI) youth who have been under intensive training on integrated farming for the past a year where Maranroola Favour emerged the best graduating trainee scooping away three individual awards from JDPM Management, Swiss Biostadt Ltd and IAR&T while Fajinmi Joseph from Apaalu, Iseyin emerged as the best farmer of the year.